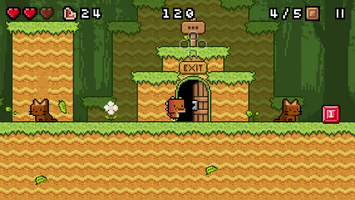 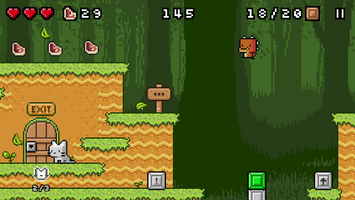 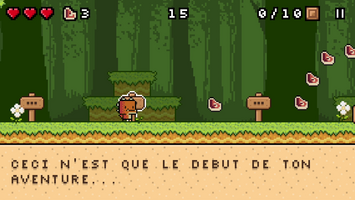 Almost 3 months after the previous version (v42), I'm back again with new stable updates. Following your feedbacks I've been very busy finding a specific niche that would – I hope – help me stand out Baby Dino Adventures from other platformer games.

I improved a lot of stuff, and fixed several bugs as well.
I'm going to talk about it very quickly below.
If you want to check the complete list, then jump to the Changelogs section below.

I talked a lot about on social medias – mostly Twitter, I guess – I don't want players to kill anyone in the game. You'll rather kind of save them. I really want the game to be kids safe, and playable by the youngest ones. A cute platformer.

Each level got a specific amount of animals – which are only cats for now, but I plan to add some more soon – You'll have to save them all by jumping on their heads. They automatically become allies after that. Once you got the maximum number of allies in a level, the exit door becomes open, and you can then reach the next level.

I'm quite satisfied by how smooth the actual controls are with a gamepad, or keyboard. Ofcourse I owe a lot to the engine, Construct 3.
I got a lot of very positive feedbacks from a few of you that already played the game.
I think I found a nice balance with the run ability, and the jump behavior with gravity (both added since previous release). It allows some interesting possibilities regarding level design, and gameplay that I really want to challenge for next levels.

Now that the basic behaviors of Baby Dino are set, I already started thinking about new abilities, and/or power-ups. This is still very early to talk about yet anyway.. Yeah, s'ry for treasing... Haha.

Well, something that is entirely new with this version – and not very visible at the same time – is that the game now saves your progress automatically.

I actually spent a lot of time to optimize, and look for the best solution. I used to save datas in my previous games using the Local Storage plugin of Construct 3. It does a great job, honestly.
But this time, I'd really need a way to store a lot of information as well as save/edit it. That's why I'm talking about Player's Progression.
I heard a lot of pros about JSON, and that's why I did it a try. Someone from the C3 community suggested me to try the C3 JSON Manager plugin to deal easily with complex JSON files.
After a couple hours of tries, and online JSON lessons (mostly for best practices) here I am with an early working auto-save datas feature.

I think almost every players I saw until now actually unintentionally skip the story. I'm not saying it's players fault.. Ofcourse, not. It's entirely mine.
When you move around in a level or run freely, you're not supposed to expect some texts to pop-up. I'd prefer players to discover things on their own instead by a tutorial text...

As a player myself, I tend to like a game more when it has a strong story. I also realized I'm very much more into a game while stories involve emotions.

That's why I'd like to add a meaningful story to the game. Even if I have already a lot of ideas and that I don't know yet how it will end... I know I do want players to have strong emotions while playing.

This version is still a very early prototype as you might understand.
My to-do list is quite heavy until I release a first version, but here is a quick overview of what I plan to do next:

This is a copy-paste of my devlog.txt file that I use daily to keep track of what I'm doing.
It includes all changes since the previous stable version (v42).

Note: Following are changes made after Brotaru build

[i] Ready to publish