I promised it, so here it is.. The game now has a save game feature. 🙌🏽 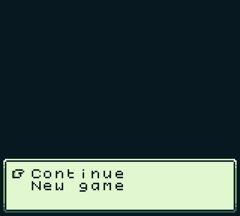 If you already played the game, it will asks you to either continue your previous game, or start a new one (which erase your current save).

I think I won't update this gamejam project anymore (unless someone find a critical bug).
I will keep it as it is now, and start working on what's next.

Well, I had so much fun building AGS that I decided to go further with this game jam entry.
This means you may expect a full-game version coming later. I don't know yet when it will be ready, but I plan to make  'A Ghost Story' a real game with around 4 to 6 hours of gameplay with a complete story.

It's probably too early to say much for now, but keep in mind I'm busy on a full-game version.. 🙃

Again, thank you very much for playing and supporting me!

Get A Ghost Story - GBJAM 7

A story driven RPG with some puzzles to solve