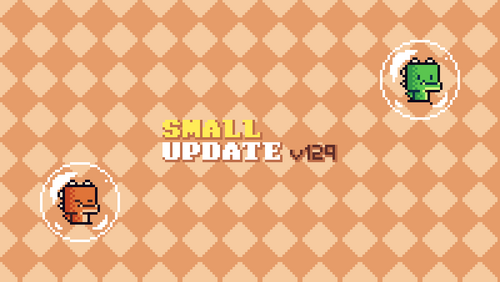 Here we go for yet another update full of bug fixes and enhancements.

The co-op feature should now be stable enough for you to enjoy it up to 4 players as I have been carefully debugging and testing each bugs you sent me.

I can't say how much your help means a lot to me. Baby Dino couldn't be the game it is today without your help.. So.. Thank you again, and I hope you’ll enjoy these changes.

If you find any issues, please keep reporting them here on our Itch.io Community forum or on our Discord server.

I’ll now get back to World 3 stuff, and continue working on these 10 new levels for the next content update - which is Cave.

Talk to you soon,
Antoine G.

Find below a complete list of all changes included in this update.

Playing in co-op should now be stable.

Level will restart only if all players are bubbled. If at least one player is alive, then others will pop in a bubble. It is possible to pop out of a bubble while jumping or if a player is on the ground on a safe area.

It is also possible to move faster near the closest alive player while you’re bubbled by holding down the jump button.

I also reworked the climbing behavior, and fixed a few issues related to the recent addition of local co-op.

If player is on the ground, idle or moving, and is overlapping a ladder/vine he/she won’t climb automatically unless he/she presses up or down buttons;

Enhanced bees behavior as they were not mean to work in local co-op.

Bees will spawn every 4 seconds (might change it later after some tests or players feedback) and follow closest player. Apart from that bees behavior remains the same: face them to prevent them from moving, jump on their head to stun them and send them back to the hive they came from.

Some players reported me they had difficulties seeing pea plant projectiles so that's why I changed their color to yellow (instead of green previously). I hope this way it will be easier for these players to identify them.